Showing posts from September, 2015
Show all

Bit errors still not a myth

September 11, 2015
I had this post in draft for a long time now, however it is evergreen. Just consider the recent exploits  focused on RAM leakage. Although, do note that ECC by itself can't give 100% protection against row hammer, so it is only loosely related. An excellent empirical work has been published in 2009 regarding DRAM Errors in the Wild: A Large Scale Field Study . " About a third of machines and over 8% of DIMMs in our fleet saw at least one correctable error per year. " - analysis by  James Hamilton " Besides error rates much higher than expected - which is plenty bad - the study found that error rates were motherboard, not DIMM type or vendor, dependent. This means that some popular mobos have poor EMI hygiene. " - analysis by ZDnet Note that such an event plainly translates to faults on non-ECC machines. So despite the fact that human error is much more probable, it is not unlikely at all that you encounter bit errors in everyday life. Consider the foll
Post a Comment
Read more

September 10, 2015
Vista refuses to connect to certain wifi routers. I worked around the wide spread issue by forcing a static IP to the client. Is this the proper solution? http://support.microsoft.com/kb/928233 I guess we will never know. Thankfully the now vintage laptop is well supported by Ubuntu 14.04 LTS, so the problem is solved for good.
Post a Comment
Read more

Free Hugs started by The Smurfs 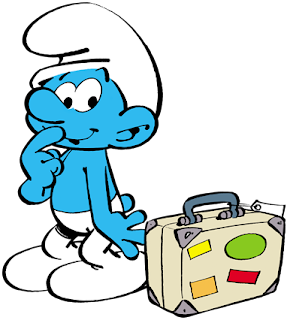 The episode titled A Hug For Grouchy  aired on  11/5/1983 . This episode revolved around the old tradition of Hug A Smurf Day . On this day, it is customary to give a hug to anyone we meet. It is hinted at by Chlorhydris, the witch, that other creatures have also taken over this tradition. For your information,  The Smurfs  was a cartoon in which little blue communist guys enjoyed their everyday happy lives until the big bad cheater capitalist shows up and tries to turn them into gold. However, thanks to obeying their totalitarian leader, the power of the community always wins the battle over the egoistic individual. I wonder whether the original inventors or the early birds of spreading the Free Hugs Campaign  have seen this episode. By the way, this series could be subject to a great deal of analysis.
Post a Comment
Read more

September 08, 2015
Unity is full of bugs.We all know it. Usually the window manager fails and decorations are gone. Sometimes all windows are stacked on top of each other at a corner. It's so bad that I had to write a script for killing and restarting the effected processes easily from a shell to resume working. All of this usually occurs when doing twisted deeds like opening a web page, however it can sometimes be triggered by toggling fullscreen or starting an application. It is always unexpected and unpredictable. If you know what to do, you don't loose any work and you don't even need to close any windows. So it's only a cosmetic issue at this level, but still not very professional. Interestingly, I have encountered this mostly in 2012-2014, and they have much reduced the occurrence rate from about 2015. Nonetheless, I don't use Unity on any of my new installs since about 2013 because of this. If you are fortunate enough to never have used this wonderful peace of engineering,
Post a Comment
Read more

September 07, 2015
A friend called for help when one of his computers failed a distribution upgrade. The upgrade was started from 12.04 LTS via the GUI. I'm not sure which version he had previously, but the standard update procedure stopped midway. The upgrade could not be resumed, so manual intervention was needed. I'm not sure whether the issue was caused by a bit error in memory, an out of space issue or by something else. Unfortunately, I don't have the error messages at hand. The solution boiled down to doing the following tedious steps: apt-get update apt-get dist-upgrade do-release-upgrade dpkg --configure -a apt-get -f install mcedit /var/lib/dpkg/status # delete section which is complained about mktexlsr # note down errors updmap-sys --synthwithtrees # note down errors mcedit /etc/texmf/... # remove invalid map file lines updmap-sys apt-get install ubuntu-desktop
Post a Comment
Read more

The following article illustrates various cases of radio signal propagation. It helps you understand why moving your indoor antenna only a few centimeters could drastically improve reception. This analysis is from 2005, however radio propagation rarely follows trends - instead it dully stays the same every year. HDTV Primer: Choosing a mounting site See the linked site for more great illustration
Post a Comment
Read more
More posts